Future plans for RAF Henlow are given funding boost 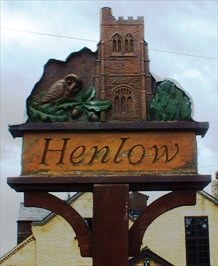 Henlow is to benefit from national funding of £170,000, as part of the next round of One Public Estate (OPE) funding.
The OPE initiative supports projects where public sector bodies work together to deliver innovation and a partnership between Central Bedfordshire Council and the Ministry of Defence received the largest allocation of funds in this round of bids.
When the planned closure of RAF Henlow was announced last year, it was an unsettling time for the community.
Since then Central Bedfordshire Council has been working closely with the Defence Infrastructure Organisation (representing the Ministry of Defence) to explore regeneration options for the site which can be delivered at pace and with maximum benefit to the local residents and businesses.
The strategic location of the site, in the heart of the Oxford-Cambridge Corridor, presents a major opportunity to deliver sustainable, resilient and thriving redevelopment and interest in the site has already been expressed by some highly innovative ambitious organisations.

The MoD is aware of the plans that the local council and commercial companies have for the development of RAF Henlow. The DIO will work with the council as the site comes forward for disposal to determine the best possible future use.
Specifically, the partnership aims to
• Build on the sense of place and community by developing future uses of the site whilst the RAF operations are being wound down
• Enable the development of significant amount of homes and jobs
• Generate the optimal  level of public fund from the sale of any land
“This funding will help us to fast track a development strategy at RAF Henlow which has huge potential,” said Cllr James Jamieson, Leader of Central Bedfordshire Council.
“The proposed regeneration of the Henlow site will secure many high-tech jobs for the local area and beyond and ensure sustainable regeneration of this former RAF site.”

The South East Midlands Local Enterprise Partnership’s (SEMLEP) Community Grants programme, having already supported 202 people back into work, has opened for its sixth round of applications.

Central Bedfordshire Council, in partnership with the Police and Crime Commissioner, has been awarded almost half-a-million pounds in funding